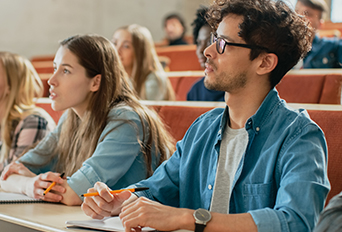 Competition
Peter. F. Drucker All India Debate Competition is organized every year for the purpose of promoting the debate culture across the country. Following are other relevant information about the event.

Only legitimate B-School, Universities and Colleges are allowed to participate in the competition. Each B-School/University/College may nominate may nominate any number of teams

Each team will consist of two students.

Conduct of the Competition:

The competition will be conducted in two rounds as under:

Teams selected for the competition will be grouped into four groups, depending on the number of registrations. If there are more than 30 teams, there might be a filtration based on a 2-minute JAM. The selected teams will debate in their own groups and the four best teams will be selected for the finals. Topics for this round will be displayed in the college website (www.vjim.edu.in) on 16.11.2016. One member of each team will speak for the motion and the other against the motion. Each member shall speak for 5 minutes, so each team gets 10 minutes. The sequence of participating teams will be decided through a draw. At the end of this phase, the topic for the Final round shall be announced.

There will be four teams, eight speakers in the final. The topics and Rules & Regulations for this round will be disclosed at the end of Round 1.

All Competitors are expected to adhere to the debate rules and conduct themselves with dignity. A debater who attempts to dominate or be rude to his opponents will lose points. Desperation is not persuasion.

Two judges shall be present at each debate who will judge each debate in a fair and responsible manner. Decision made by the judges is final.

Debates will be evaluated on the following criteria:-